Revisiting the Sounds of Trust 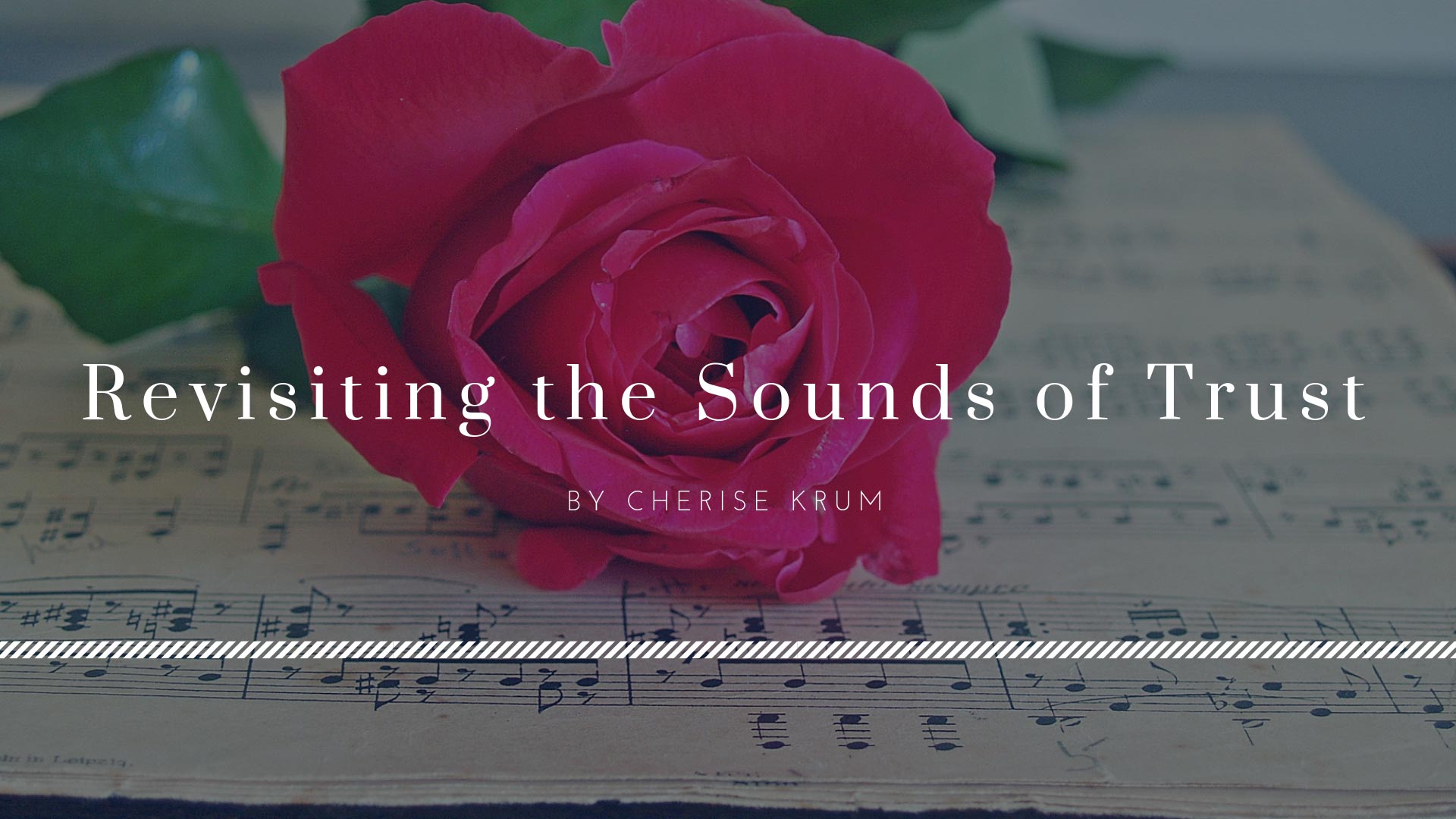 “Just trust the Lord” is a phrase I’ve probably heard for most of my life.

However, it’s also been a phrase that I’ve heard so often the words had unknowingly become almost cliché in certain situations. So when I was journaling with the Lord several weeks back and scribbled on to the pages “trust me” (coming from God to me) I found myself slightly dissatisfied. It almost didn’t seem like a “real answer” in my brain at that moment, more like spiritual jargon. Trust became a repeated theme popping up frequently, however.  When I prayed about a next blog topic a couple weeks later and the immediate word that Holy Spirit gave was “trust” I knew it was something He was intent on me pressing into.

One evening a few weeks later, I picked up my journal while talking to the Lord. I was looking for specific direction on some things and found myself in a “let’s do business and get’r done” frame of mind. As I journaled and found the Holy Spirit bringing up the “trust me” theme again, I put the pen down. This did not exactly comply with my “get’r done” mindset at that moment. “Really?” I wanted something hardcore tangible I could grab on to. Something specific I could “do.” I suddenly had a surprising response well up and come to the surface. “God – I don’t know how.” I then found myself asking, “Father, what IS trust?” Freedom settled. This was key for me in opening the door to a greater personal revelation and understanding of trust that God had been moving me toward all along.

Trust isn’t necessarily one of those topics that I find particularly motivating to delve into. It seems plain and ordinary. It doesn’t stand out as a shiny “first pick.” In my mind, it could probably be compared to mortar in between the stones of a house. You don’t even really see it when you look at the house unless you’re specifically looking for it. However, it contributes immense stability to the building. God was beginning to draw my eyes to take a closer look at the mortar of trust. As I did, I found the “sound” of it began to be rewired in my brain.

Tightening and Re-wiring Our Connection

The sound of trust?? Yep. The sound of trust. Did you ever try to listen to music through speakers that have faulty wiring which causes static and crackling in the background? (As a musician just thinking about this makes me groan). The song can be beautiful but the disruption in the connection muddles the sound that is heard and directly impacts the communication of the message.

I believe there are sounds and frequencies in heaven that are pure and undefiled. Sounds like trust, love, joy, etc. In the gospels Jesus directs us to pray to our Father saying, “Let Your kingdom come and Your will be done on earth as it is in heaven.” I have found individually, and jointly, that God wants to tighten our “wires of connection” to Him so that we are greater enabled to hear the pure sound of heaven and to release it. In doing this we’ll find the “static” (doubt, fear, worry, anxiety, etc) diminished and removed.

Relationship is the Soil of Trust

The primary verse God has brought to mind lately is a well-known one–Proverbs 3:5.

“TRUST in the LORD with ALL Your heart…”  (Selah) Lean not on your own understanding. In all your ways acknowledge Him and He will make your paths straight.”

TRUST. Trust in the LORD. Trust HIM with ALL Your heart.

Seems like hard work, right? What if it’s not as hard as it sometimes seems? I think one of the most significant and foundational aspects of trust that God has been clarifying recently is that trust isn’t based on the what to do as much as the Who. “Trust in the Lord.” We are enabled to trust by WHO we are relating to and connecting to. Trust is founded and built on relationship.

I think relationships are like the soil of a garden. The health of the garden is obviously very connected to the health of the soil. Just like healthy plants are connected and rooted in healthy soil, I believe trust is connected and rooted in the soil of healthy relationship(s). Trust is not a matter of working up some kind of willpower but abiding in healthy relationship. We could tell a plant to grow in rock hard soil all day long, but if its soil is dry and needs moisture, it’s not going to grow too much until the soil is nurtured with some water and the roots absorb that moisture, nurturing the plant. Trust will germinate in healthy soil.

One of my favorite tools of discovering greater understanding and truth in words is going to the original language, especially the Hebrew language. The word for “trust” in the above verse (Proverbs 3:5) is “Batach.” (It can also be translated as “Betach” in some verses.) There are a couple basic “sounds,” (a.k.a. descriptions and synonyms) for this word that jumped out at me.

When you were a child did you ever have those occasional times of a playmate “picking on you” that got a bit excessive, despite your attempts to stop it? I think each one of us has encountered this at least once in our lifetime. When thinking about this the other day God brought a scene to mind of when this “excessive picking” happened to me once as a kid. Despite my attempts I was not able to resolve it on my own. Then I did what most any kid would do — go to one of my parents. Just by being within a certain perimeter of their presence, the “picking” and teasing stopped. In fact, sometimes I didn’t even need to say a word to my parents. Why? I was simply taking refuge in their presence and leaning on a higher power. Just being in their presence caused my opposing counterpart to back off. Both of us knew the hostility was not permitted in their presence. It’s really quite amazing to think about as an analogy with God. In the same way we find refuge in the presence of our parents as children we can find refuge in the Presence of our heavenly Father as children of God.

Psalm 46 says, “GOD is our refuge and strength.” His Presence is simply an outworking of the essence of Who He is. The sound of trust is sustained as we abide in our ever-present SOURCE of Refuge.

Psalm 37:3 says, “Trust in the Lord and do good; dwell in the land and enjoy SAFE pasture.”

Ever play the “fall and I’ll catch you” game as a kid where you would willingly fall backwards to be caught by the “catcher” behind you? (It wasn’t really my favorite.)  There were some people I would be willing to play the game with and others I wouldn’t even consider, especially if they were half my size or had a mischievous grin on their face. My participation was based on my perception of safety. I believe God wants us to enjoy safe pasture regardless of our circumstances.

One of the verses that the word “batach” can be found in is Proverbs 28:1. “The wicked flee when no one is pursuing, but the righteous are bold as a lion.”

When I know I am secure and safe it creates a boldness and confidence to move forward. We don’t have to drum it up.

I believe we are in a season where God is calling us to take greater risks both individually and jointly. Trust is a key part of what enables us to move forward in ways that we wouldn’t otherwise do. When I trust someone, I’m willing to take risks that take me out of my comfort zone and go places I wouldn’t be willing to go because of the trust that has been cultivated in that relationship.

The story of Ruth came to mind repeatedly while writing. Talk about trust! This woman’s heart had been impacted so greatly through relationship (i.e. Naomi, the family, God), she was enabled to move forward and willingly step out from a place of trust and confidence that had been cultivated deeply in her being. It wasn’t just “Christianese.” Ruth was just as human as we are. The relationship is what impacted her. As we read the story we can see the results of that trust. It moved the hearts of a people in another nation (Israelites). Ultimately, it became part of God’s master redemptive plan as Ruth became the great grandmother of King David and a part of the lineage of Jesus. Let us not underestimate the profound impact of deep trust!

If there is an area that God has highlighted as you were reading this where the sound of trust has some static in the background, I encourage you to take a moment and ask Father God how He would like to bring further clarity to that sound and listen to what He would say. Maybe there are some wires that need some tightening or reconnecting. Maybe there is some relational “soil” that needs watered or fed. Simply let Him show you. He is able to bring forth in us a trust that is deep to the core, strong, true and beyond our greatest imagination.

“Spirit lead us where our TRUST is without borders. Let us walk upon the waters, wherever you would call us.” (“Oceans” – Hillsong)

Hi! My name is Cherise Krum. I reside in Catawissa, Pennsylvania surrounded by mountains and farmland where the four distinct seasons exist in FULL! I was born and raised in this area with my growing family and have served both in the local church and marketplace arenas for much of my life. I value music, family, heart connections with others and am a passionate fruit lover resulting from growing up at a family orchard and farm market.

In 2009 the Holy Spirit unexpectedly invaded my world a year after graduating from college while working in International Logistics for a local business. A few short months later this small-town girl found herself in Dallas, Texas at Christ for the Nations Institute. While there, God turned my world upside down and imparted a deep hunger for Him, His Presence, and a heart to carry His Presence and goodness to a world He dearly loves. This desire has become a core life passion and continues to grow stronger through varied arenas and seasons in life.

I thoroughly enjoy communicating basic heart truths from personal, everyday interactions with God in a way that inspires and instills greater freedom and desire in others to know Daddy God and His heart more. I love releasing passionate worship through music and dance, as well as releasing His heart through intercession. My desire and prayer is that you are BLESSED and EMPOWERED in the areas God has called you to and that the words shared here may simply plant seeds of His life and greatness in you.