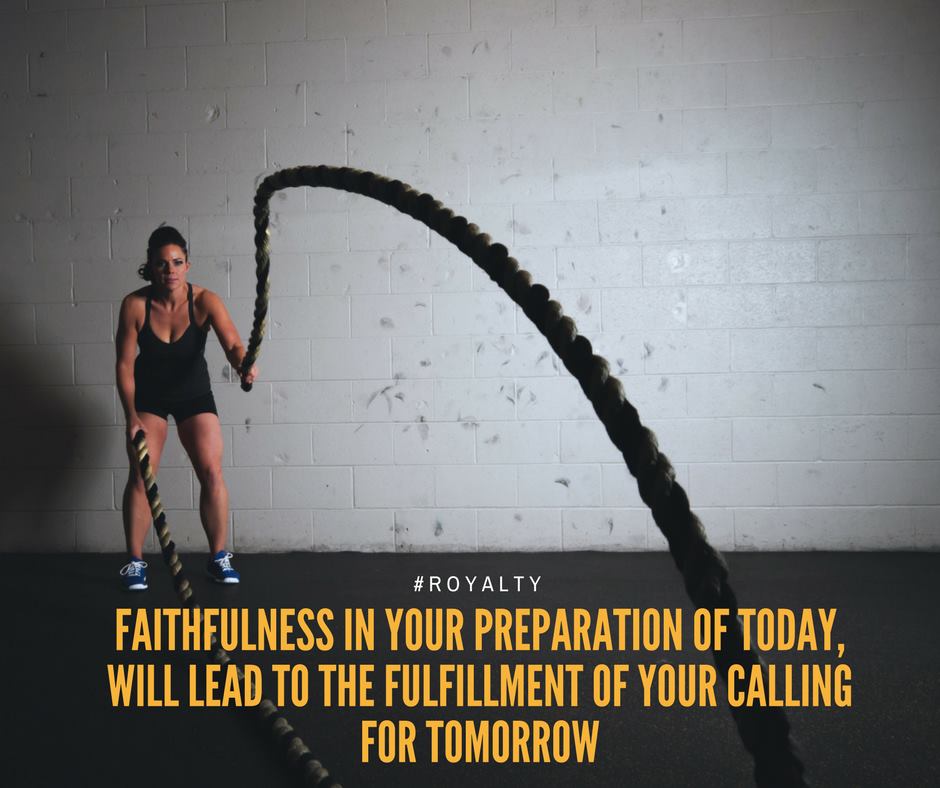 Faithfulness and Calling
When we look at the life of David in 1 Samuel 16, God anoints him for His service. God saw his heart and not his appearance.

So, it’s very important to pay attention some things about David:

Brave, skillful, warrior, knows how to express himself. The Lord was with him. (1 Samuel 16:14)

HE WAS FAITHFUL:
He fulfilled the instructions of his father, Jesse.

HE WAS A GOOD ADMINISTRATOR:
Being in charge of a flock, even when King Saul called him, he got up very early in the morning and left the flock in the hands of a shepherd, while he went to assist the king. He was responsible in his task.
HE WAS DETERMINED, BEING AN INSPIRATION FOR OTHERS:
In 1 Samuel 17:32, David says:

No one need be discouraged because of Goliath. I will fight against him myself.

Here we see how David’s determination influenced the people.

HE WAS PREPARED:
Verse 36: Trusting in the Lord, that if He delivered him against lions, He would deliver him from Goliath.
HE WAS CERTAIN IN THE LORD:
The Lord saved without the need of a sword or a spear (1 Sam. 17:47).
HE GAVE HONOR WITHOUT CONDITIONS:
Even with the envy Saul had for him, David successfully fulfilled every assignment that Saul gave him.
HE WAS A WORSHIPER:
David had a habit of playing the harp. (1 Sam 18:10)
HE DID THE RIGHT THING, EVEN THOUGH HE HAD OTHER OPTIONS:
In 1 Samuel 24:6, David’s men suggested killing Saul, since it was practically in his hands, but David did NOT. He said:

I can not raise my hand against him, because he is the anointed of the Lord.

David did not take revenge or pay attention to his men, he did the right thing even in the middle of suggestions.

HE FORGAVE THE ENEMY:
1 Samuel 24:19. He was honest with Saul that he could have killed him and instead he chose to do good rather than evil.
HE PRAYED AND ASKED GOD:
When Saul persecuted him in 1 Sam. 23:10, David prayed and asked God. David was a man of prayer. Saul was a man who allowed himself to be intimidated by man and asked people instead of God directly.
So, Saul recognized that the Lord was with David, and he began to envy David. In the end, after Saul realized that David did good instead of evil, he recognized that David would be the next king and would consolidate the kingdom of Israel.

Although the Lord is with us and society can see this reality, these points of David can guide us in our position as people of royalty (1 Peter 2: 9) in the Kingdom of God. It is not only the anointing of God or the position we have in society.
We see very important people in the world, in positions of government or owners of large companies that work with corruption and abuse and still have “success” in the eyes of the people. David was prepared where nobody saw him, with the sheep and fighting against bears and lions, before fighting against Goliath. It is not what we see, but the motivation of the heart and the call of God on each person.

In the kingdom of God, we are courageous people, with His presence, with gifts and talents, with all the ability to administer, govern well, using our power for the good of others. Jesus, who is our example, did the same thing: He was faithful. He administered the business of His father. He had confidence and trust in Him. He was determined. He fulfilled the work for which He was called. He honored the Father and the Holy Spirit. He showed forgiveness on the cross. He had a life of adoration and prayer.

NOW I WANT TO ASK YOU THESE QUESTIONS:
None of these answers change the love that God has for us. He loves us without conditions. But as royalty and influential people who carry His presence within us, we are growing and there are things that can and should be changed if we are willing. This comes from the depth of our heart and not just from the outside. It comes with the revelation of who we are in Him, and not with appearances.

Let’s meditate with Him, asking these questions and asking the Holy Spirit to reveal the areas that should be changed, giving them to Him.

Father, I thank You for the conviction and revelation that You will bring through these questions. Increase in us courage to walk with You, and through the changes that will come. I am willing to be taught and transformed to walk in the position and call that You already spoke over my life, in Jesus´ name. Amen.

Dayanna Jiménez is certified as a doctor in her home nation of Costa Rica. Her specialty is in sports nutrition having 13 years of experience in this field. In addition, she is currently a third-year student of Global School of Supernatural Ministry founded by Dr. Randy Clark and is fulfilling her internship with Giving Light in Elizabethville, PA. She has worked in ministry with an itinerant minister from 2013-2015, bringing the Kingdom in churches from Belize, Mexico, USA and Costa Rica. She has been involved with the American community for the last 6 years.

After having an encounter with the Holy Spirit through a dream in April 2016, Dayanna experienced the heart of the Father, leading her to walk in the revelation of sonship in radical way. Because of this, she started a project called “Royalty – You have a Purpose & Destiny” in stewardship of this truth.

Founder, Royalty: You Have a Purpose and Destiny 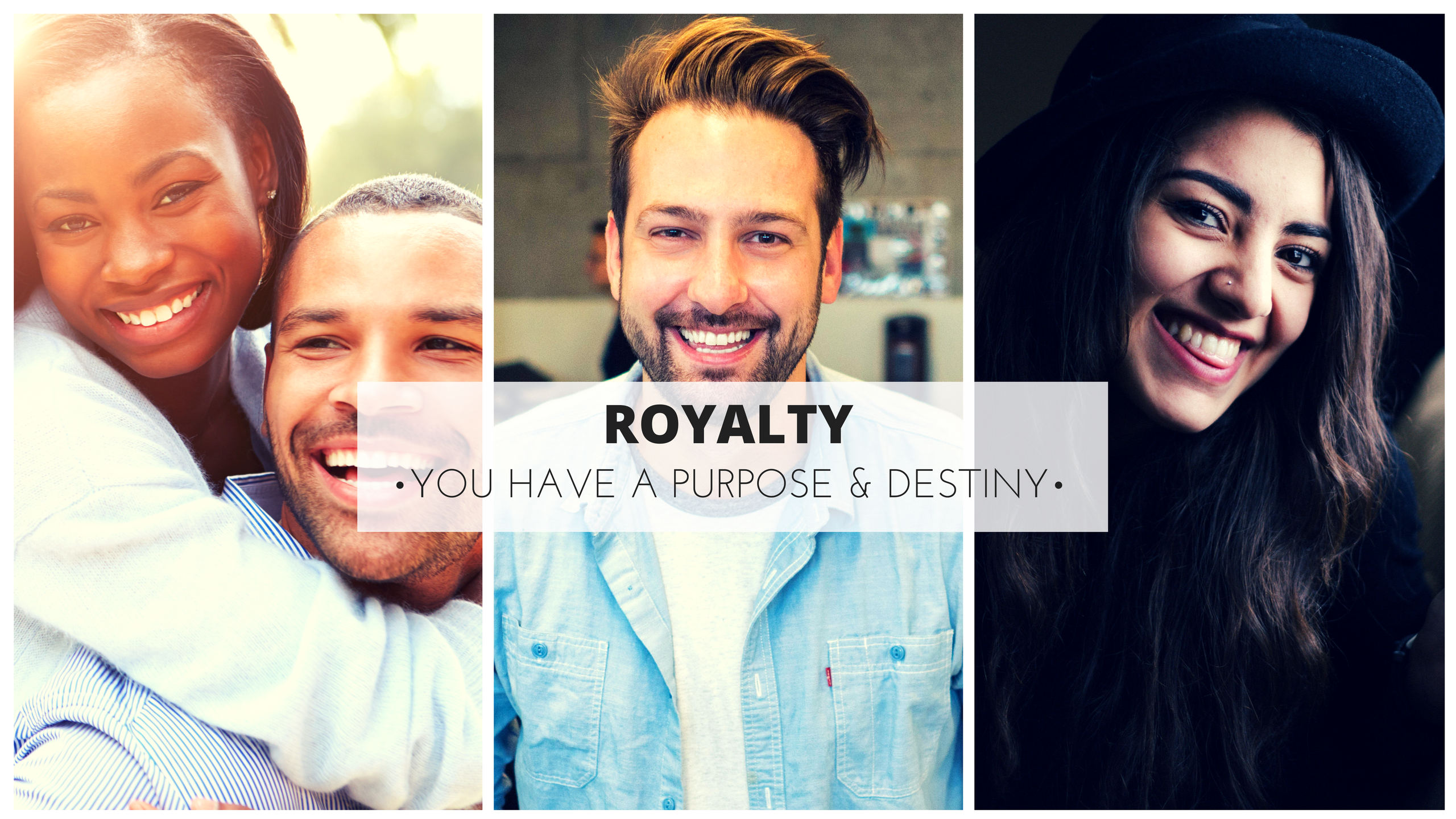 You have a purpose and a destiny.
Join the ROYALTY Facebook group today for weekly encouragements and reminders that you are chosen, unique, and powerful in God.